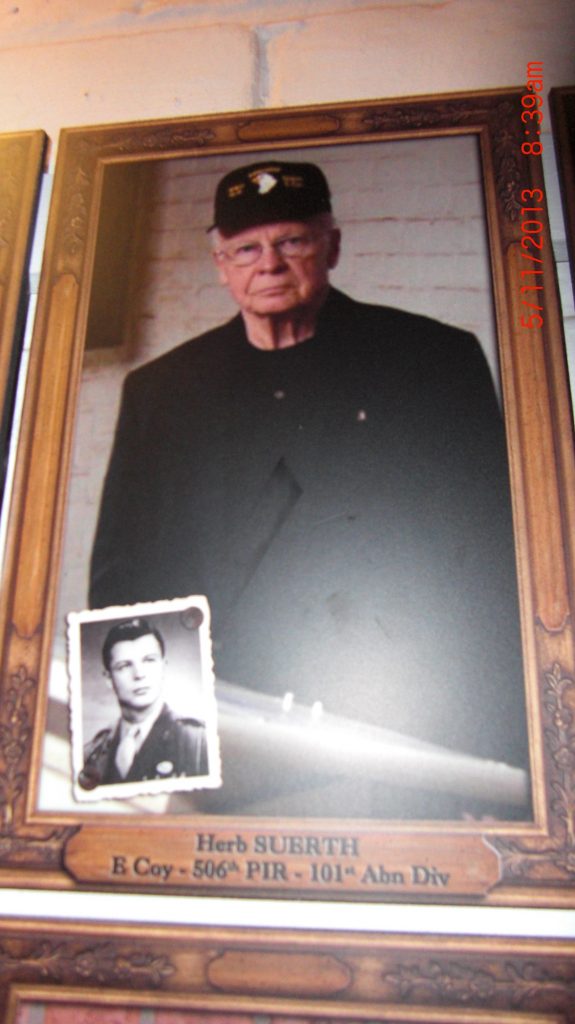 Herb Suerth, Jr. was part of the historic Band of brothers of WWII whose surviving members are now down to a precious few. When the original book was released in 1992, his exploits were not included, and when Steve Ambrose and I did the original interviews, he was not part of it. Perhaps that was because Suerth was a replacement, arriving in Easy Company just before the deployment to the Ardennes Forest and the Battle of the Bulge.

But when the screenplay evolved in 2000, his character made a brief appearance in the back of a truck carrying the men through the frozen night toward Bastogne. He was called by his nickname, “Junior.” Nor was his time in combat very long–about three weeks. In January 1945, he was terribly wounded by a German artillery shell fired at the flash of light from an unthinking soldier who lit a cigarette in the dark.

Herb was a wonderful traveling companion, and I had him with me on three Band of Brothers® Tours, and our fellow travelers relished the opportunity to be with a member of this fabled company. Three things that Herb shared with us have always stuck in my mind:

First: His description of the scene of the American Army falling back in front of the German onslaught was dramatic. It looked to him like Washington at Valley Forge–heads bandaged, no weapon, gaunt faces and glazed eyes. “They were running away.”

Second: In 2012, he presided over the dedication of the Dick Winters statue along Causeway 2 in Normandy. It was a memorable day and Herb was the focal point of all assembled.

Third: And the one I enjoy the most because of its soldier’s humor. Long before Herb was ever a paratrooper, he was with the engineers. While stationed in New York pursuing engineering studies, the Army billeted him on an upper floor of the Broadway Central Hotel in the Bowery, and not the classiest of places. Each evening there was a steady stream of men coming from and going to the hotel, especially to the first two floors. Those were off limits, and run by the madam of the bordello who also owned the hotel; but tight security prevented the soldiers on the upper floors from going astray.